If you needed further proof of Bernie Sanders’s argument that most Americans stand with him on the issues, consider the reaction to Alexandria Ocasio-Cortez’s Green New Deal. Despite attacks from the leadership in, or around, both parties, over 80 percent of voters support the litany of proposals advocated by the House resolution: job and income guarantees, universal health care, a cleaner environment, and lower socioeconomic inequality. Americans turn out, yet again, to be far less conservative than elites have maintained over the last half-century.

Nowhere has the gap between majority will and elite consensus been more conspicuous or longstanding than on US foreign policy. 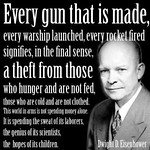 I Like Ike
(Image by JoeInSouthernCA)   Details   DMCA
Read the rest of the story HERE: