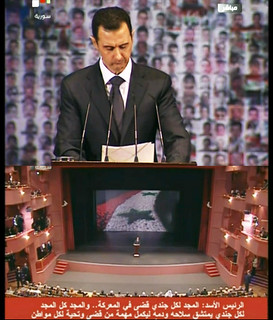 Bashar Al-Assad Swan Song in Damascus Opera House January 6. 2013
(Image by Imaginary Museum Projects: News Tableaus)   Details   DMCA
A new report by Pulitzer-winning journalist Seymour Hersh says the Joint Chiefs of Staff has indirectly supported Bashar al-Assad in an effort to help him defeat jihadist groups. Hersh reports the Joint Chiefs sent intelligence via Russia, Germany and Israel on the understanding it would be transmitted to help Assad push back Jabhat al-Nusra and the Islamic State. Hersh also claims the military even undermined a U.S. effort to arm Syrian rebels in a bid to prove it was serious about helping Assad fight their common enemies. Hersh says the Joint Chiefs’ maneuvering was rooted in several concerns, including the U.S. arming of unvetted Syrian rebels with jihadist ties, a belief the administration was overly focused on confronting Assad’s ally in Moscow, and anger the White House was unwilling to challenge Turkey and Saudi Arabia over their support of extremist groups in Syria.
Read the rest of the story HERE: