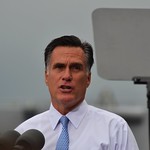 Mitt Romney
(Image by Tobyotter)   Details   DMCA
In a vote that was predictable but momentous, President Trump was acquitted by the Senate on the charges contained in two articles of impeachment, related to abuse of power and obstruction of Congress, that had been endorsed by the House of Representatives in December. The final vote was 48 to 52 on Article one, and 47 to 53 on article two. The only surprise was when Mitt Romney of Utah voted to convict Trump on the first article, in what would prove the lone GOP defection. Romney is the only Senator to vote against his party. In fact, he became the first Senator in United States history to vote in favor of convicting a president of his own party in an impeachment trial.
Read the rest of the story HERE: