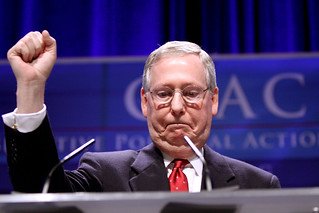 Mitch McConnell
(Image by Gage Skidmore)   Details   DMCA
In an unprecedented move, Senate Republicans vowed to deny holding confirmation hearings for President Barack Obama's Supreme Court nominee -- even promising to deny meeting privately with whomever the President picks. The historic move outraged Democrats and injected Supreme Court politics into the center of an already tense battle for the White House. The decision to not hold hearings is a historic move from the Senate, which has regularly held confirmation hearings for nominees since hearings became routine practice in 1955, the Senate historian's office said Tuesday. Senate Majority Whip John Cornyn said he also would not meet with a nominee.
Read the rest of the story HERE: