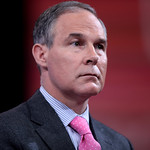 Environmental Protection Agency administrator Scott Pruitt
(Image by Gage Skidmore)   Details   DMCA
The U.S. Senate has confirmed Oklahoma attorney General Scott Pruitt to head the EPA in a party-line 52-46 vote. As attorney general, Pruitt sued the EPA and fought the agency as it tried to regulate the fracking boom in Oklahoma. He has also questioned the impact of climate change, and during his confirmation hearing said his own views on the issue are "immaterial." Democrats took particular issue with Pruitt's seemingly cozy relationship with the oil industry. He faced sharp questions over a letter his office sent to the EPA accusing the agency of overestimating the amount of methane released into the air from drilling natural gas wells.
Read the rest of the story HERE: