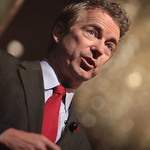 Rand Paul
(Image by Gage Skidmore)   Details   DMCA
Sen. Rand Paul, a member of the Senate Foreign Relations Committee, said that he is inclined to oppose former U.N. ambassador John Bolton or former New York City mayor Rudolph W. Giuliani if either is nominated for secretary of state. Paul argued that Giuliani and Bolton, the people whose names have circulated most widely, “have made it clear that they favor bombing Iran... I’m hoping that if there’s a public discussion of this before it happens, people in the incoming administration realize that regime change made us less safe and the Iraq War made us less safe,” Paul said. “We don’t need, as our chief diplomat, someone whose idea of diplomacy is dropping bombs.”
Read the rest of the story HERE: