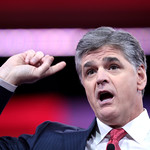 Sean Hannity
(Image by Gage Skidmore)   Details   DMCA
Sean Hannity has called on the witnesses in Robert Mueller's investigation to delete their evidence and destroy all their hardware in an attempt to derail the case. The Fox News host on Wednesday night said witnesses should "acid-wash the emails on the hard drives and your phones" then smash them into "itsy-bitsy pieces" with a hammer. The advice — which would be illegal to follow — appeared to be sarcastic and was delivered as part of an attack on Hillary Clinton. Hannity ultimately theorized that Clinton could get away with destroying evidence but allies of President Donald Trump could not.
Read the rest of the story HERE: