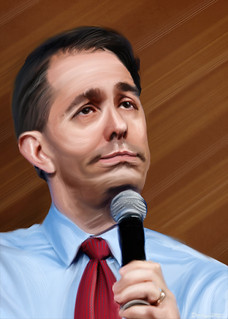 Scott Walker - Painting
(Image by DonkeyHotey)   Details   DMCA
Republican presidential candidate and Wisconsin Gov. Scott Walker on Sunday blamed President Barack Obama for the killings of police officers. 'I think his absence of leadership, of speaking out on this issue' has contributed to police being killed, Walker said on CNN's 'State of the Union.' 'We need a president who first and foremost says that law enforcement professionals across this country are doing the job,' he said. 'We need them to keep us safe, we need to have their back, and he has been silent on this and that's an outrage.'
Read the rest of the story HERE: