With startling statistics, a federal investigation of the Baltimore Police Department documents in 164 single-spaced pages what black residents have been saying for years: They are routinely singled out, roughed up or otherwise mistreated by officers, often for no reason.

The 15-month Justice Department probe was prompted by the death of Freddie Gray, the black man whose fatal neck injury in the back of a police van touched off the worst riots in Baltimore in decades. To many people, the blistering report issued Wednesday was familiar reading.

Danny Marrow, a retired food service worker, said that over the years, he has been stopped and hassled repeatedly by police.

"It started when I was 8 years old and they'd say, with no probable cause, 'Hey, come here. Where are you going?'" he said. "No cause, just the color of my skin." 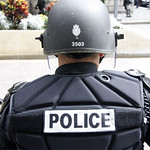 Police
(Image by G20Voice)   Details   DMCA
Read the rest of the story HERE: