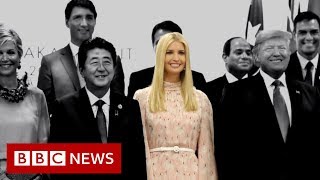 What exactly is the role of Ivanka Trump? - BBC News Eyebrows were raised when the US president's daughter took centre stage alongside world leaders at the G20 summit. So what is Ivanka Trump's White House ...
(Image by YouTube, Channel: BBC News)   Details   DMCA

Trump never expressed any pro-immigrant sympathies, save for those regarding immigrants from Norway, but on camera he has called immigrants criminals, rapists, and “animals” who “slice and dice” children, and has joked about shooting families at the border. Diaz, who was undocumented during the time she worked as a housekeeper at Trump’s golf resort, responded to Ivanka’s claim at the Consumer Electronics Show.

“What she said at the CES conference was ridiculous. I worked for her as an undocumented immigrant. The Trump Organization has a long history of recruiting immigrants and they knew and know that many of us were undocumented. The Trump's didn't fight to ‘retain’ the hardworking people that took care of them and their company. They exploited us for personal and political reasons. Ivanka wants us to ignore the horrible things she and her father have done to immigrants in America."