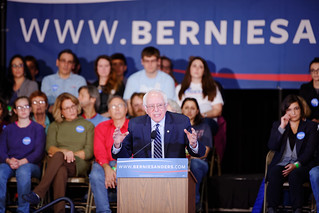 Senator of Vermont Bernie Sanders at Derry Town Hall, Pinkerton Academy NH October 30th, 2015 by Michael Vadon
(Image by Michael Vadon)   Details   DMCA
NY Daily News- Hillary Clinton is perhaps the worst possible Democratic candidate who could ever run against Donald Trump. I sincerely believe he could beat her in the general election. Bernie Sanders, on the other hand, would give Donald Trump fits in a head-to-head match up. Let me break it down:
Read the rest of the story HERE: