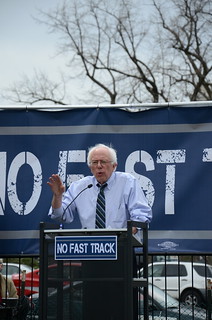 AFGE Participates in #StopFastTrack Rallies
(Image by AFGE)   Details   DMCA
WASHINGTON (AP) — Democratic presidential candidate Bernie Sanders has won the endorsement of MoveOn.org, a grassroots organization that has been at the forefront of liberal causes. MoveOn says the Vermont senator was supported by nearly 79 percent of its membership in an online vote. Hillary Clinton received nearly 15 percent. MoveOn endorsed President Barack Obama during the 2008 primaries and helped rally Democrats in opposition to the Iraq War. The group lists 8 million members and says it plans to mobilize nearly 75,000 of its members in Iowa and New Hampshire on Sanders' behalf. The endorsement was widely expected. MoveOn encouraged Massachusetts Sen. Elizabeth Warren to run for president but when she declined many of supporters got behind Sanders, who has campaigned against income inequality and reducing the influence of money in politics.
Read the rest of the story HERE: