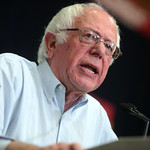 After President Donald Trump fired Attorney General Jeff Sessions on Wednesday, Sen. Bernie Sanders said that any further move by the president to impede or interfere with the ongoing investigation by Special Counsel Robert Mueller would be considered an "obstruction of justice and impeachable offense."