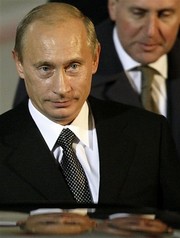 RUSSIA PUTIN
(Image by Jedimentat44)   Details   DMCA
Russia launched airstrikes in Syria on Wednesday, catching U.S. and Western officials off guard and drawing new condemnation as evidence suggested Moscow wasn’t targeting extremist group Islamic State, but rather other opponents of Bashar al-Assad’s regime. One of the airstrikes hit an area primarily held by rebels backed by the Central Intelligence Agency and allied spy services, U.S. officials said, catapulting the Syrian crisis to a new level of danger and uncertainty. Moscow’s entry means the world’s most powerful militaries — including the U.S., Britain and France—now are flying uncoordinated combat missions, heightening the risk of conflict in the skies over Syria.
Read the rest of the story HERE: