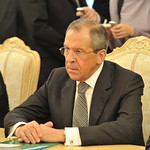 Sergei Lavrov
(Image by Utenriksdept)   Details   DMCA
Russian Foreign Minister Sergei Lavrov told reporters Monday that Russia would provide "the most active" support to the Syrian army to keep the strategic city of Aleppo and the surrounding area from falling into the hands of "terrorists." "What is happening in and around Aleppo now is what we had warned the Americans about beforehand — and they know it: that we will in the most active way support the Syrian army from the air not to allow the seizure of this territory by terrorists," Lavrov said.
Read the rest of the story HERE: