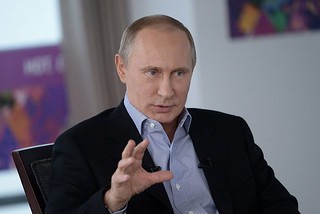 Vladimir Putin
(Image by theglobalpanorama)   Details   DMCA
A ballistic missile defense shield the United States has activated in Europe is a step to a new arms race, Russian President Vladimir Putin said, vowing to adjust budget spending to neutralize “emerging threats” to Russia. The United States switched on the $800 million missile shield at a Soviet-era base in Romania on Thursday saying it was a defense against missiles from Iran and so-called rogue states. Speaking to top defense and military industry officials, Putin said the system was aimed at blunting Russia’s nuclear arsenal. 'This is not a defense system. This is part of U.S. nuclear strategic potential brought onto a periphery. Until now, those taking such decisions have lived in calm, fairly well-off and in safety. Now, as these elements of ballistic missile defense are deployed, we are forced to think how to neutralize emerging threats to the Russian Federation,” he said.
Read the rest of the story HERE: