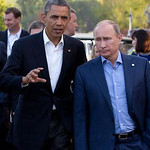 Vladimir Putin's government accused Barack Obama of "Russophobia" on Wednesday after he criticized Donald Trump for cozying up to Moscow. Obama said Tuesday that Trump sees Putin as a "role model" — someone who "invades smaller countries, jails his opponents, controls the press and drives his economy into a long recession." Kremlin spokesman Dmitry Peskov dismissed Obama's remarks as "electoral-style rhetoric," Russia's state-run news agency TASS reported. "Sadly, we see the continuation of this blatant Russophobia. All we can do is express our regrets in this regard," Peskov said. Peskov also noted that Obama does not use the same "rhetoric" when meeting Russian officials.