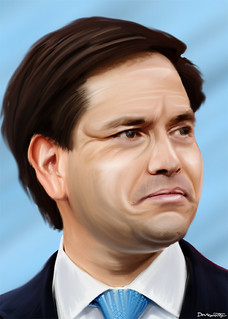 Marco Rubio - Painting
(Image by DonkeyHotey)   Details   DMCA
Marco Rubio is a U.S. senator. And he just can’t stand it anymore. “I don’t know that ‘hate’ is the right word,” Rubio said in an interview. “I’m frustrated.” This year, as Rubio runs for president, he has cast the Senate — the very place that cemented him as a national politician — as a place he’s given up on, after less than one term. It’s too slow. Too rule-bound. So Rubio, 44, has decided not to run for his seat again. It’s the White House or bust. “That’s why I’m missing votes. Because I am leaving the Senate. I am not running for reelection,” Rubio said in the last Republican debate, after Donald Trump had mocked him for his unusual number of absences during Senate votes.
Read the rest of the story HERE: