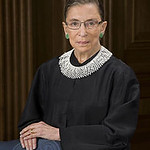 Donald Trump called on Wednesday for the resignation of Supreme Court Justice Ruth Bader Ginsburg, describing her as mentally unfit after she lambasted him in a series of media interviews. "Justice Ginsburg of the U.S. Supreme Court has embarrassed all by making very dumb political statements about me," Trump said in a Twitter post. "Her mind is shot - resign!" The New York billionaire chided Ginsburg, 83, for criticizing him this week and expressing concern for the country's future if he is elected in November. Trump said it was inappropriate for Supreme Court justices to weigh in on political campaigns. He told the New York Times on Tuesday that he thought it was a disgrace to the court and that Ginsburg should apologize to her colleagues on the bench.