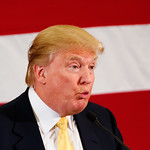 Donald Trump
(Image by Michael Vadon)   Details   DMCA
Republican senators railed against President Donald Trump's threatened tariffs against Mexico in a private lunch on Tuesday with White House and Justice Department officials, who struggled to explain their legal process for implementing the new levies. Roughly a half dozen GOP senators stood to speak about why the decision to impose tariffs on Mexico was ill-advised. The members insisted Trump hold off on any declarations until he can brief members personally on the plan. But with Trump in Europe and members scheduled to leave for D-Day commemorations, that may not be possible before Monday's deadline for activating the first band of 5% tariffs on all goods coming from Mexico.
Read the rest of the story HERE: