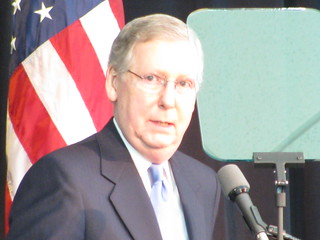 Sen. Mitch McConnell
(Image by ConspiracyofHappiness)   Details   DMCA
The White House is considering picking the Republican governor from Nevada to fill the current vacancy on the Supreme Court, scrambling political calculations in what is expected to be a contentious confirmation battle in which Senate Republicans have pledged to play the role of roadblock. President Obama is weighing the selection of Brian Sandoval, a centrist former federal judge who has served as governor since 2011, according to two people familiar with the process. Though the review process is in its initial phases and it is unclear whether the governor could ultimately emerge as the president’s pick, even the prospect of his nomination poses a difficult dilemma for Senate Republicans who have promised not to consider any nomination before November’s elections.
Read the rest of the story HERE: