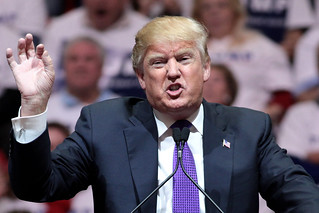 Donald Trump
(Image by Gage Skidmore)   Details   DMCA
Many Americans still cannot believe that the bombastic Mr. Trump, best known as a reality television star, will be on the ballot in November. Plenty are also anxious about what he would do in office. But for leading Republicans, the dismay is deeper and darker. They fear their party is on the cusp of an epochal split — a historic cleaving between the familiar form of conservatism forged in the 1960s and popularized in the 1980s and a rekindled, atavistic nationalism, with roots as old as the republic, that has not flared up so intensely since the original America First movement before Pearl Harbor. Combining modern-day fame and an age-old demagogy, Trump bypassed the ossified gatekeepers and appealed directly to voters through a constant Twitter stream that seemed interrupted only by television appearances.
Read the rest of the story HERE: