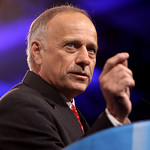 Rep. Steve King, R-Iowa, who has a long history of racist and outrageous remarks, lost his long-held House seat in a Republican primary on Tuesday, NBC News projected. With 98 percent of the vote counted, King trailed his main rival, state Sen. Randy Feenstra, by 7,866 votes, or 45.7 percent to 35.9 percent. Three other GOP candidates were each in single digits. President Donald Trump, who did not endorse in the primary, congratulated Feenstra on Wednesday morning.