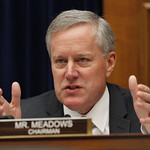 Rep. Mark Meadows officially resigned from Congress on Monday, more than three weeks after he was chosen to be President Donald Trump's new chief of staff. Trump tapped Meadows, R-N.C., who announced in December that he would not seek re-election in 2020, for his new post on March 6. The resignation was effective at 5 p.m. Monday, and he will start his new role Tuesday, his spokesman said. Meadows replaces Mick Mulvaney, who, in an acting capacity, was the president's third chief of staff. Reince Priebus and John Kelly  previously served in the role. Trump has said Mulvaney will become the U.S. special envoy for Northern Ireland.