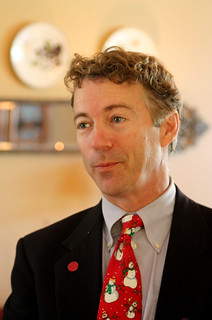 Rand Paul
(Image by Rand Paul for U.S. Senate 2010)   Details   DMCA
Rand Paul dropped out of the 2016 president race on Wednesday, short on cash and support, two days after finishing with under 5 percent in the Iowa caucuses — less than one quarter of the support his father had drawn four years earlier. The Kentucky senator, who pitched his libertarian-infused brand of conservatism as transformational for the Republican Party, will exit the national stage and instead run for reelection to the Senate. His moment in the 2016 campaign never materialized. Paul is one of the GOP’s leading non-interventionist voices. But with increasing instability in the Middle East, terror in Paris and an attack in San Bernardino, Paul’s risk-averse brand of foreign policy has fallen out of favor, as the Republican Party has returned to its roots as proponents of a more muscular and aggressive international posture.
Read the rest of the story HERE: