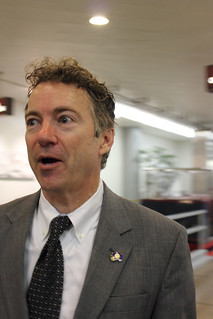 Sen. Rand Paul, R-Ky.
(Image by Medill DC)   Details   DMCA
The idea of constructing a massive wall along the Canadian border won’t win any prizes for ingenuity, according to Sen. Rand Paul. “That’s a pretty dumb idea,” Paul said Monday, when asked about the proposal one of his fellow Republican presidential candidates, Wisconsin Gov. Scott Walker, said he would consider a day earlier. Paul's refusal to endorse a Canadian border wall is both an illustration of discomfort within the Republican field about extent of the anti-immigration pandering currently taking place, and more importantly, a real blow to the wall-builders of America.
Read the rest of the story HERE: