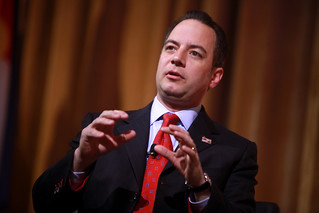 Reince Priebus
(Image by Gage Skidmore)   Details   DMCA
Republican National Committee Chair Reince Priebus defended Donald Trump on several morning shows Sunday, saying that campaign traditions don't apply to the presumptive GOP nominee. Trump came under fire last week for refusing calls to release his tax returns, despite having indicated he was open to releasing the returns earlier in the campaign season. Voters, Trump told ABC's George Stephanopoulos Friday morning, are not entitled to review his returns before heading to the polls, and the tax rate he pays is 'none of your business.' Elsewhere, Trump insisted that not only was there nothing to learn from his taxes, but that the public wasn't interested. 'I've got to tell you, I think that all these stories that come out - and they come out every couple weeks - people just don't care,' Priebus said.
Read the rest of the story HERE: