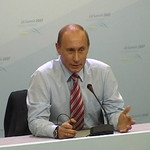 Russian President Vladimir Putin said Sunday his country has no intention of trying to influence the U.S. presidential election and hopes once the election is over, relations between the two countries will normalize. He called the notion of spying by Russia hypocritical, since American security is 'spying on everyone and eavesdropping on everyone.' He said Russia's security works under strict guidelines while the NSA, or U.S. National Security Agency, does not. That's when the lights blinked off, then immediately back on, during the news conference. Putin looked up, laughing.'Certainly something went wrong' he said. 'Maybe I said something wrong.'