That said, there is no good evidence that conspiracy theories are necessarily more common now than they have been at other points in history. Researchers at RAND have found evidence that the proliferation of false beliefs and the blurring of opinions and facts—something they refer to as “ 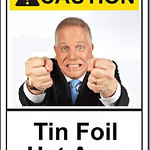