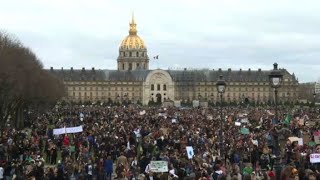 Paris students gather en masse to protest climate change
(Image by YouTube, Channel: AFP news agency)   Details   DMCA
A wave of climate change protests swept the globe Friday, with hundreds of thousands of young people sending a message to leaders headed for a UN summit: The warming world can’t wait for action. Marches, rallies and demonstrations were held from Canberra to Kabul and Cape Town to New York. “Basically, our earth is dying, and if we don’t do something about it, we die,” said A.J. Conermann, a 15-year old high school sophomore among several thousand of young people who marched to the Capitol building in Washington. The protests were partly inspired by the activism of Swedish teenager Greta Thunberg, who has staged weekly “Fridays for Future” demonstrations for a year, urging world leaders to step up efforts against climate change.
Read the rest of the story HERE: