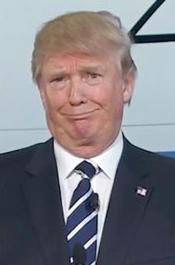 Donald Trump
(Image by thesmokinggun.com)   Details   DMCA
A list is quickly building as to what can get you summarily ejected from a Trump rally. On last count, Trump couldn’t stand the following at his events: Muslims, the press, and babies. Now, Trump’s added protesters holding Constitutions. On Thursday, several protesters attended a Trump rally in Maine. They chose to stand up and silently display pocket-sized copies of the Constitution of the United States. They were referencing Khizr Khan, the father of a slain Muslim-American soldier, who pulled a pocket Constitution out during his speech and openly asked Trump whether he had ever read the document himself. The protesters in Maine were immediately thrown out of the rally by Trump campaign staff, and faced a booing crowd on their way out.
Read the rest of the story HERE: