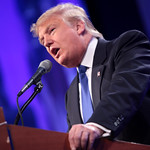 Donald Trump
(Image by Gage Skidmore)   Details   DMCA
When the president decided to turn on the spigots of false and misleading claims, as of day 558, he’s made 4,229 Trumpian claims — an increase of 978 in just two months. That’s an overall average of nearly 7.6 claims a day. In the president’s first 100 days, he averaged 4.9 claims a day. But the average number of claims per day keeps climbing the longer Trump stays in office. In fact, in June and July, the president averaged 16 claims a day. Put another way: In his first year as president, Trump made 2,140 false or misleading claims. Now, just six months later, he has almost doubled that total.
Read the rest of the story HERE: