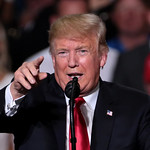 Donald Trump
(Image by Gage Skidmore)   Details   DMCA
Trump is going off into the haunted places of his mind again. He said Thursday, "I will tell you, anybody throwing stones, rocks, like they did to Mexico and the Mexican military, Mexican police, where they badly hurt police and soldiers of Mexico, we will consider that a firearm. They want to throw rocks at our military, our military fights back. We'll consider — and I told them — consider it a rifle. When they throw rocks like they did at the Mexico military and police, I say consider it a rifle." The only thing that stops a bad guy with a rock is a good guy with an M4 carbine. I suspect fire control will not be a priority. I suspect the president* doesn't care. He's rooting for a bloodbath.
Read the rest of the story HERE: