To wipe-out the largest segment of Trump tax liability, the GOP 2017 Tax Cut & Jobs Act raised the Federal Income Tax (FIT) thresholds of the Alternative Minimum Tax (AMT); criticized for not being inflation-indexed. Reducing the number of AMT taxpayers by over 95% in 2018. 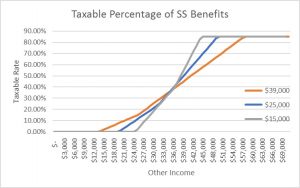 Also, not indexed to inflation since 1983 are the FIT thresholds for taxing Social benefits, which originally affected 10% of recipients but now over 50%. H.R. 860, sponsored by Rep. John Larson (CT-1) and cosponsored by 208 in the House proposes to raise the threshold to $100K & $50k for joint & separate returns.

This legislation would affect tens of millions voters accross all 50 states and if passed by the U.S. House prior to the 2020 election would reflect badly only the GOP House members that vote against it as well as those in the Senate refusing to cosponsor it.