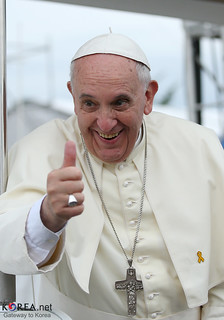 Korea_Pope_Francis_Haemi_Castle_21
(Image by KOREA.NET - Official page of the Republic of Korea)   Details   DMCA

Sr. Simone Campbell (lawyer, and founder of Nuns on the Bus) says she was asked about the Sanders-Vatican connection. She notes that he pope has repeatedly called "for Catholics to 'meddle in politics,'...  to, yes, feed and house and meet basic human needs from our parishes, but also to go out into the world and call for, vote for, big change - a reformed immigration policy that recognizes and embraces the dignity of our brothers and sisters, regardless of where they happened to be born; national spending priorities that recognize the need for safe, affordable housing as greater than the excitement over a newer, faster, deadlier weapon of war."