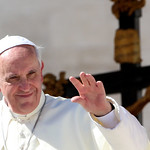 An explosive article written by 2 close associates of Pope Francis has accused Steve Bannon, the chief White House strategist, of espousing an “apocalyptic geopolitics” whose roots are “not too far apart” from that of Islamist extremism. The article in La Civiltà Cattolica, which is vetted by the Vatican before publication, lays out a scathing critique of “evangelical fundamentalism” in the US, arguing that, on issues ranging from climate change to “migrants and Muslims”, proponents of the ideology have adopted a twisted reading of scripture...that promotes conflict and war above all else. It claims that fake religious arguments are being used to demonise segments of the population – particularly when it comes to migrants and Muslims – and to promote the US as a nation that is blessed by God, without ever taking into account the “bond between capital and profits and arms sales”.