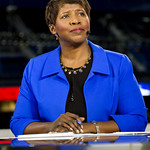 Gwen Ifill
(Image by NewsHour)   Details   DMCA
Politicians on both sides of the aisle publicly mourned the passing of legendary reporter on Monday at the age of 61. The long-time PBS broadcaster was reportedly diagnosed with endometrial cancer just last year and remained private about her health struggles up until her death. Democratic Sen. Tammy Baldwin wrote that Ifill was “a trailblazer who elevated our national conversations and debates,” and her colleague Tom Udall added that she “was one of the best in the business. Her thoughtful contributions to public discourse will be remembered. We need more like her.” President Obama also began his Monday press conference by expressing condolences for Ifill’s family and colleagues.
Read the rest of the story HERE: