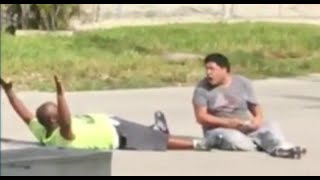 Black Therapist with Autistic Patient Shot by Police While on Ground with Hands Up Charles Kinsey, a therapist who works with people with disabilities, says police shot him while he was on the ground with his hands in the air and trying to help a ...
(Image by David Pakman Show, Channel: David Pakman Show)   Details   DMCA

Man. Even as Repubs shamelessly fan the flames of a divided nation, cops in Miami shot an unarmed black behavioral therapist trying to calm an agitated autistic patient playing with a toy truck, even though the caregiver was lying on the ground with both arms in the air trying to explain to jumpy armed cops, 'Sir, there's no need for firearms.' Muses the black onlooker recording the incident, 'Why they shoot the black boy?' Hmmm.