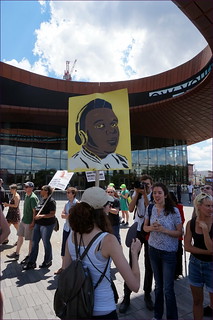 1 Year Commemoration of the Murder of Michael Brown, the Ferguson Rebellion, & the Black Lives Matter uprising.
(Image by The All-Nite Images)   Details   DMCA

VICE News collected and analyzed comprehensive data on officer-involved killings that occurred in the year after August 9, 2014. Here's what we found.

Brown's death was a seminal moment in arousing US consciousness of structural racial bias in police departments around the country, and the grand jury's decision 3 months later not to indict Darren Wilson, the Ferguson copr who killed him, proved to many that that bias permeates every facet of the criminal justice system.