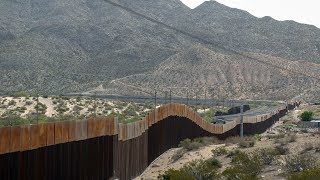 WINNING! Pentagon Announces Transfer of $1 BILLION for WALL Construction!!! Trump WINS Again, and there's NOTHING that Democrats or RINO Republicans can do about it!!! ***Support my channel by getting our gear and accessories ...
(Image by YouTube, Channel: Dr. Steve Turley)   Details   DMCA

Acting Defense Secretary Shanahan informed Homeland Security's Kirstjen Nielsen that he had authorized the U.S. Army Corps of Engineers to build 57 miles of fencing along the border, as well as improving roads in Yuma and El Paso, CNN reported.

House Armed Services Committee Chairman Smith (D-Wash.) released a statement Tuesday saying the committee has denied the Department of Defense’s request to reallocate the money for the wall.

“This needs to top. Based on the unfunded requests received for the Fiscal Year 2020 budget and the issues raised by the Marine Corps, there are obviously more pressing issues with readiness and modernization that these funds should go to.

Instead of focusing on readiness, hurricane recovery and other genuine issues, the administration continues to spend billions of dollars on an imaginary crisis.”