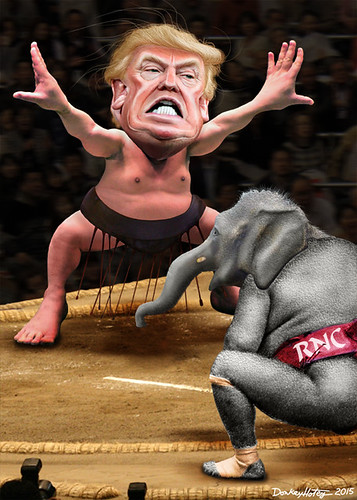 Yokozuna Trump vs. The RNC
(Image by DonkeyHotey)   Details   DMCA

Apparatchiks are corroding the foundations of democracy.


The “monstrous endgame” of the Republican assault on health care is just the leading edge of an attack on multiple fronts, as the G.O.P. tries to overturn the will of the voters and undermine democracy in general.

For years, we've been seeing, in America, an invasion of our institutions by right-wing partisans whose loyalty is to party, not principle. This invasion is corroding the Republic, and the corrosion is already very far advanced.

How do people who think and behave this way respond when the public rejects their agenda? They try to use their power to overrule the democratic process, rigging elections, taking away governor powers.

David Frum, warned a year ago: “If conservatives become convinced that they cannot win democratically, they will not abandon conservatism. They will reject democracy.” That’s happening as we speak.