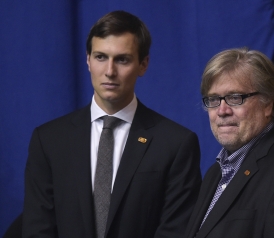 The New York Observer, a newspaper owned by Donald Trump’s son-in-law Jared Kushner, published an opinion piece Friday calling for the FBI to launch a coordinated crackdown on nationwide anti-Trump protests, mobilizations and recount efforts. Titled “Comey’s FBI Needs to Investigate Violent Democratic Tantrums,” the article was written by Austin Bay, a retired U.S. Army Reserve colonel and adjunct professor at the University of Texas in Austin. “The hard left’s violent reaction to Donald Trump’s election is vile and dangerous,” writes Bay. “Peaceful protests? No, the demonstrators vandalize and destroy. They have two goals: intimidating people and sustaining the mainstream media lie that Donald Trump is dangerous.”