Deal struck with Israel after intense talks hailed as 'victory' for Palestinian prisoners on hunger strike for 40 days. 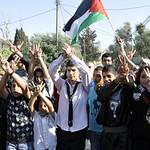 The 40-day hunger strike raised tensions with Israel as protests in support of the strikers spilled over into clashes in the occupied West Bank and along the Israel-Gaza border.

About 1,500 inmates launched the actionon April 17, in one of the largest such strikes.

More than 800 prisoners, who had stuck with the hunger strike until Saturday, ended it after talks held with the International Committee for the Red Cross (ICRC) and the Palestinian Authority concluded in an agreement with Israel, allowing prisoners to receive two visitors per month.