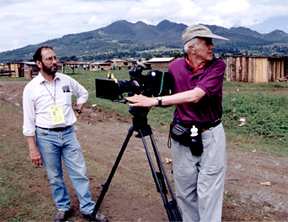 Haskell Wexler, one of Hollywood's most famous and honored cinematographers and one whose innovative approach helped him win Oscars for "Who's Afraid of Virginia Woolf?" and the Woody Guthrie biopic, "Bound for Glory," died Sunday. He was 93. A liberal activist, Wexler photographed some of the most socially relevant and influential films of the 1960s and 1970s, including the Jane Fonda-Jon Voight anti-war classic, "Coming Home," the Sidney Poitier-Rod Steiger racial drama "In the Heat of the Night" and the Oscar-winning adaptation of Ken Kesey's "One Flew Over the Cuckoo's Nest." His last film credit, the biopic "To Begin the World Over Again: The Life of Thomas Paine," starring Ian Ruskin, is in postproduction.