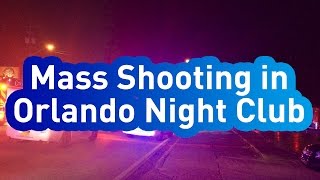 Mass Shooting has taken place in a Nightclub in Orlando
(Image by Express TV, Channel: Express TV)   Details   DMCA
A gay nightclub here was the scene early Sunday of the worst terror attack in U.S. history since 9/11. 50 people were killed inside the Pulse club and at least 53 people were injured, police say. The gunman was Omar Mateen of Ft. Pierce, Florida, a law enforcement source said. Orlando police shot and killed Mateen. "It appears he was organized and well-prepared," Orlando Police Chief John Mina said early Sunday. The shooter had an assault-type weapon, a handgun and "some type of (other) device on him." Before Sunday, the deadliest shootings in U.S. history were at Virginia Tech in 2007 and Sandy Hook Elementary School in 2012, with 32 and 27 killed.
Read the rest of the story HERE: