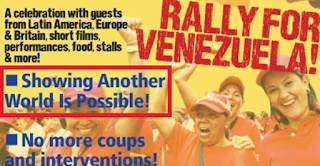 All eyes are focused on the US-election fiasco, Syria, Russia, and yellow journalism, as it used to called back in the Dark Ages. In the meantime, apparently in preparation of the Coronation of HRC, the Obama administration has doubled down on the destruction of the Chavez legacy in Venezuela.

Imagine owning bonds that are solid, and being offered an opportunity to trade them in for new ones paying a higher interest rate. Then, saying 'No!'. And saying no, even tho the new bonds would be backed with increased security.

This is the same device Nixon used to destroy Chile's economy before the coup that ended the Allende government in the '70s. Obama's legacy will be in the toilet if this works - whether Hillary wins or not. Can you imagine being known as the 21st-century Nixon?
Read the rest of the story HERE: