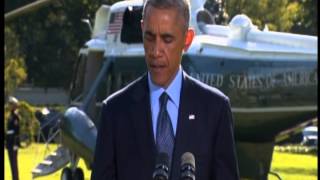 President Obama Speaks on Airstrikes in Syria
(Image by KRON 4, Channel: KRON 4)   Details   DMCA
The U.S. administration sought on Friday to contain fallout from a leaked internal memo critical of its Syria policy, but showed no sign it was willing to consider military strikes against Syrian President Bashar al-Assad's forces called for in the letter signed by dozens of American diplomats. The document - sent through the State Department’s “dissent channel,” a conduit for voicing contrary opinions meant to be confidential - underscored long-standing divisions and frustrations among Obama’s aides over his response to Syria’s five-year-old civil war. A draft of the cable, signed by 51 State Department officers, calls for "targeted military strikes" against Assad’s government - something Obama has long opposed - to stop its persistent violations of a ceasefire with U.S.-backed anti-government rebels that is largely ignored by Syria and its Russian supporters.
Read the rest of the story HERE: