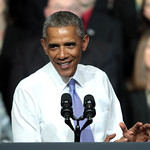 Barack Obama
(Image by Gage Skidmore)   Details   DMCA
In unusually candid remarks, President Obama privately told a group of Democratic donors last Friday that Senator Bernie Sanders of Vermont was nearing the point at which his campaign against Hillary Clinton would end, and that the party must soon come together to back her. Obama acknowledged that Clinton was perceived to have weaknesses as a candidate, and that some Democrats did not view her as authentic. But he played down the importance of authenticity, noting that President George W. Bush — whose record he ran aggressively against in 2008 — was once praised for his authenticity.
Read the rest of the story HERE: