The number of children and teens in the United States who visited emergency rooms for suicidal thoughts and suicide attempts doubled between 2007 and 2015, according to a new analysis.

Researchers used publicly available data from the National Hospital Ambulatory Medical Care Survey, administered by the US Centers for Disease Control and Prevention every year. From the 300 emergency rooms sampled, the researchers tracked the number of children between 5 and 18 who received a diagnosis of suicidal ideation or suicide attempts each year.

Diagnoses of either condition increased from 580,000 in 2007 to 1.12 million in 2015, according to the study, published Monday in JAMA Pediatrics. The average age of a child at the time of evaluation was 13, and 43% of the visits were in children between 5 and 11. 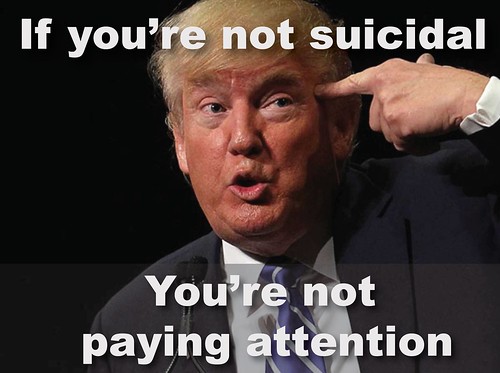 trump_if_you_arent_suicidal
(Image by exquest)   Details   DMCA
Read the rest of the story HERE: