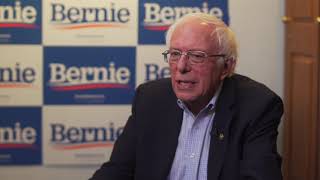 One-on-one interview with Bernie Sanders WFAA's Jason Whitely sat down for a one-on-one interview with Sen. Bernie Sanders Friday night before a supporter rally in Mesquite. MORE: ...
(Image by YouTube, Channel: WFAA)   Details   DMCA
“I know a little about the power of the 1%,” Sanders proclaimed. “I understand the billionaire class has endless money. They have been buying elections; we’re seeing that right now. But at the end of the day, while the billionaire class is in fact powerful with endless money, the 1% is 1%.”

Jason Stringer, 29, when he listened to Sanders: “Everything he said, I kind of already felt, about student debt, health care.”

Monique and Jose Yanez, of Mesquite, 29, were there with their son, Innocent, 8, and daughter, Serenity, 3.

“I think he’s the only candidate who can actually beat Trump, said Jose, a retail store manager.” Why?  “I don’t think those intimidation tactics Trump does will affect Bernie,” he said. “The only thing he has on him is the socialism stereotype, and I don’t think that’s going to work. There’s nothing new. They’ve been saying that about him from the start.”